I am not that person who will take out the camera and shoot their plate with a delicious gourmet salad or a beautifully decorated chicken tikka masala. You won’t see those giant tasty burgers on my photos. I would definitely prefer to make my stomach happy with the food on the table than the keen eyes of my instagram followers. But I’ve never been so close to such kind of culture, which literally celebrates the food and drinks as part of their life, before visiting the markets in and around Cape Town.

During our trip to South Africa, we’ve seen so many happy people around food, wine or craft beer. Now, when I try to reimagine all these markets offering those tasty dishes, what I remember is not the exact look or type of the food but the enjoyment of the moments around it with friends, families, beloved ones.

Let’s take the very simple part of the South-African cuisine – the braai. It is much more than just a barbecue, no matter what tourists say. First of all it contains a greater variety of meats – kebabs, boerewors, wild meat steaks, marinated chicken, pork or lamb chops, flavoured sausages, fish, crayfish, and many more. But moreover the braai is a social occasion. It has a special place in the daily lives of South-Africans no matter their skin color or origin.

So having in mind all these social emotions around food, we encountered our first experience of this kind on the market of Cape Point Vineyards. There is no doubt why it’s called community market. Organized every Thursday for the locals in the area of Noordhoek, it is a pure celebration of life through food and wine. When you hear “market” in Europe, the usual picture in your mind is lines of stalls where different wares and/or delicacies are sold. But from just selling or consuming food on the spot to using it as a socializing tool, there is a huge difference – a whole continent.

Based in a very scenic off-the-beaten track area at the bottom of the mountain hills of Noordhoek, Cape Point Vineyards’ proximity to the Atlantic ocean makes the air so fresh which has its influence not only to the wine they produce but also to the atmosphere. The winery itself is an award winning one and as many others in the area of Cape Town offers a variety of recognised wines. 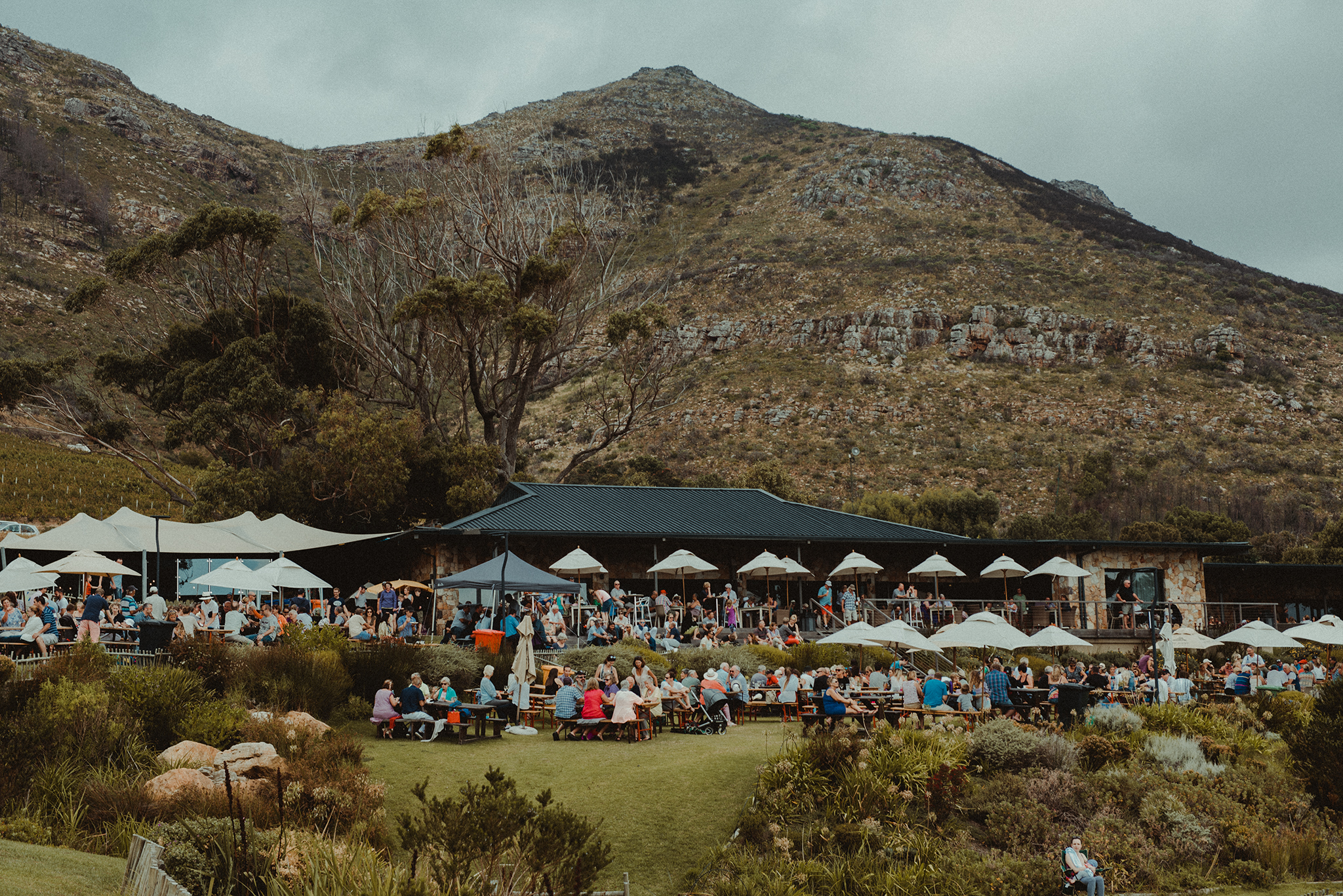 Even though, it was a short late afternoon visit, we felt it was a very good start for introducing us to the tastes of the cape. Fortunately, the following days were full of such experiences.

The next day was the time to head back to the Mother city. We took our favourite Chapman’s Peak Drive and headed to Hout Bay. It was a bit rainy in the beginning of the day which makes one consider to dive into more indoor activities. However that weather was the reason for completely different but still amazing views on the way to Hout Bay.

Driving towards the harbour we found out it is too early for the local market, so we should look for other place to kill some time. Actually we’ve never experienced this feeling of “having to kill some time”during our 23-days trip to South Africa. There is so much to see there. So we quickly found the place to spend the extra hour.

When entering the town of Hout Bay we passed by the shop of Original T-Bag Designs. Right on the edge of Imizamo Yethu township this company is one of the best examples of social entrepreneurship on the right place. By engaging the local women the business owner has built a sustainable production of beautifully crafted accessories made of used and then dried tea bags. The whole upcycling process is happening in-house and is organized within the very local community. We were so impressed by the story behind, that we couldn’t go out without buying something to support the cause. But the best moment was when the owner itself reached to us and after realizing my girlfriend is a photographer, asked her for some photos that she could use in a book telling the real stories of the women working there.

After this special moment it was already the time for the Bay Harbour market. Actually we were informed about this place by our AirBnb host in Muizenberg who was a seller of very nice leather flip-flops on this market, so we expected it will be a different experience than only food event. It definitely was. So thank you for all the recommendations, Sabi&Erik.

We parked the car on the very harbour, so we had some time to take a look around. The scenery of the bay was truly fascinating. It was so calm and in the same time so lively. We felt like we’ve just laid our boat alongside the quay for having an evening on land. 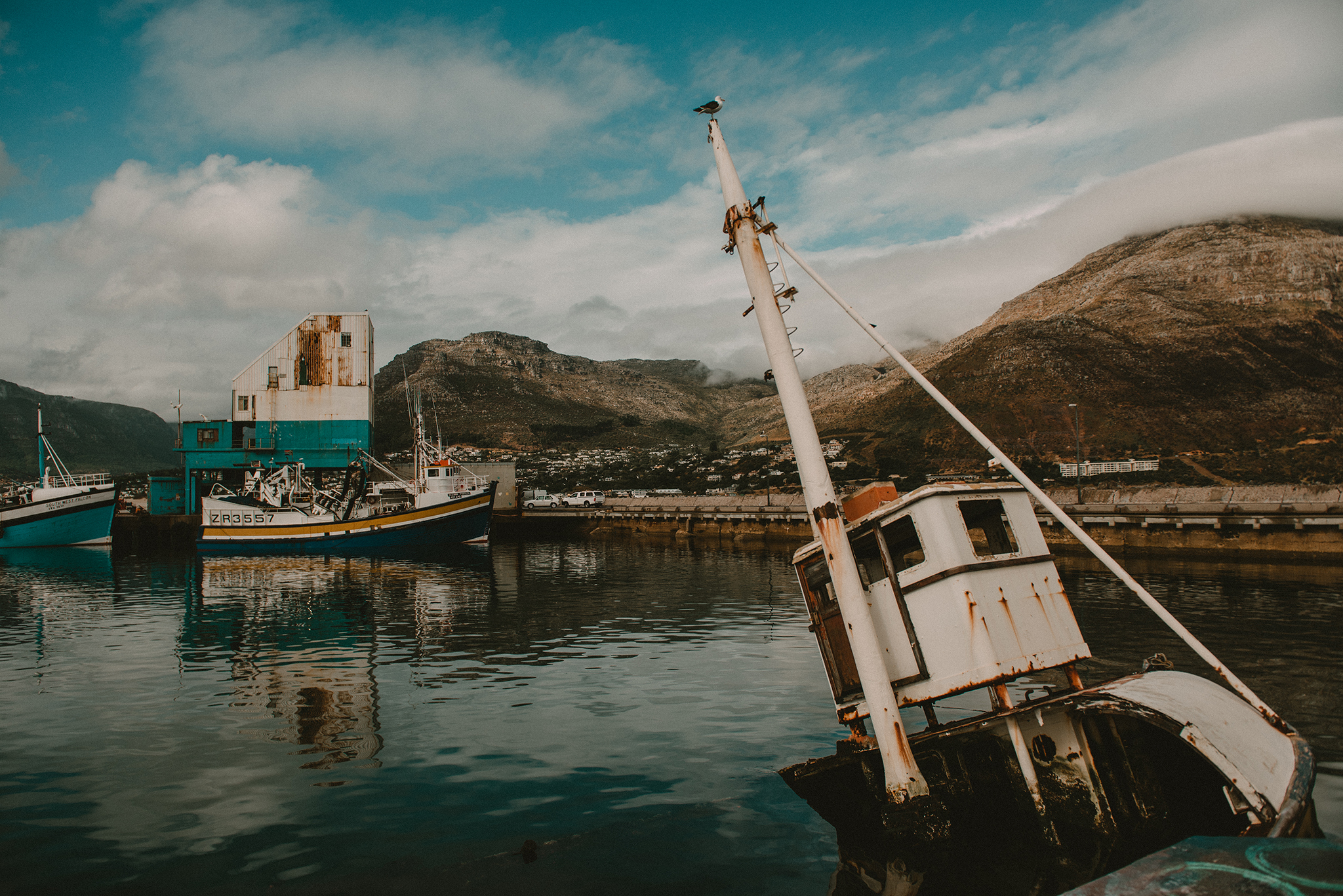 After the short stroll around we’ve entered the workshop where the very market was happening. Among the sellers we found some from the previous day in Cape Point Vineyards but the visitors were new, different and many more. Everybody was greeting the others with a glass of wine, a piece of dried meat in hand or a rich glass of craft beer. I had to be cautious with the alcoholic drinks as I had to drive back to Cape Town but couldn’t resist the Beach Blonde ale.

While celebrating and enjoying this great gathering of socializing human beings and the deliciousness of the cape dishes, we almost felt like locals. In that very moment we heard the word “Bulgaria” – the name of our country, right behind us. Being so many miles away you don’t expect meeting someone from your small country there.

But great moments are to be shared with great people. We met two Bulgarian sisters, one of which was Iliana Chernakova – a fashion model who was spending her time in Cape Town for a shooting project. My girlfriend was very keen to get which photographer she was shooting with, so after the first excitement the chat came to the fact that one of her most favorite Bulgarian photographers was going to join us in a minute. Nikola Borissov is a very talented fashion photographer who was often referring to Cape Town as “home”. In the end of the day we had such great time with them that we made plans to meet again and spend time together during our stay in South Africa.

I think that evening we were “infected” by the vibe of the place and the culture. It was not the great food, neither the craft beer, nor the wine, even though my girlfriend enjoyed it a lot, but the celebration of life which made our day so special.